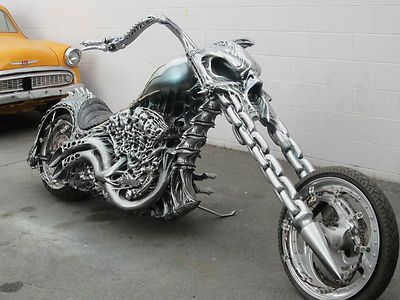 Ghost Rider is a 2007 American supernatural superhero film same Comics, the film stars Nicolas
Cage as Johnny Blaze, a stunt motorcyclist who sells his soul to the Devil and transforms into the
vigilante Ghost Rider.
This Panhead Chopper was custom built for the movie and As you can see from the pic there was an actual bike made for this movie, the Ghost Rider motorcycle in the movie and wasn’t all CGI. It’s a real custom build chopper and it’s rideable or at least somewhat rideable. The chrome shell is actually fiberglass molded around a custom-made chopper from Australia. The bike is 11-feet long and weighs more than 500 pounds. The down side is that: It’s not street-legal, and if you run the engine too long it starts to melt the fiberglass. OK and well the turning radius and lack of front suspension.