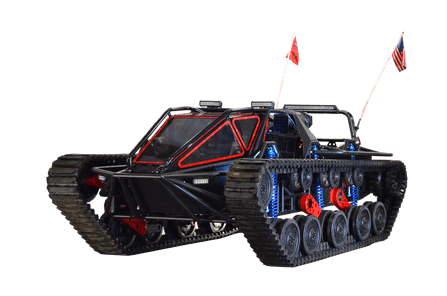 Luxury Super tank
The Ripsaw SSR (Super Sand Rail) series
Since 2013, Howe and Howe Tech has spent thousands of man hours developing these consumer based Ripsaw chassis for the high end luxury market and extreme off-road enthusiast
Ripsaw SSR (Super Sand Rail) series Ripsaws are the most extreme and most terrain dominant Ripsaws ever developed. Designed with 1500hp and an astonishing .2 hp/lbs power to weight ratio, with over 112 inches of track on the ground, the Ripsaw SSR stands as one of the world’s most exhilarating off-road vehicles ever conceived. Wheel speed is no longer necessary to traverse slopes of loose terrain such as mud, sand and snow. The Ripsaw SSR sets new benchmarks in terrestrial platform development and now stands as the pinnacle of extreme off-road travel.

As far as the standard version, there’s no exact word on price, but the development team says the EV2 can take up to 6 months to fabricate and can cost “well into the 100s of thousands depending on desired luxury and performance packages.

Check out the site: http://www.ripsawtank.com/